A schools’ mental wellbeing project, an orchestra, theatre and a choir are among some of the community groups in Burnley to benefit from over £40,000 of funding.

The Edward Stocks Massey Bequest Fund was established by the will of the late Edward Stocks Massey in 1910. Its aim was to fund the provision of education “whether mental, physical, technical or artistic”, and the “advancements of science, learning, music or other arts for the inhabitants of Burnley”.

This year, 14 awards totalling £43,150 have been distributed to projects, individual people and organisations in the Burnley area.

As well as the schools’ mental wellbeing project other recipients include Towneley Hall Museum & Art Gallery, Heasandford Primary School, Burnley Film Makers and St Peter's Parish Church.  Furthermore, two Burnley students will receive scholarships worth a total of £3,000 over the period of the degree to provide them with financial help to progress into higher education later this year.

Burnley Film Makers was granted £500. The voluntary group’s chair, secretary Mike Breeze, said: “We are a group of enthusiastic film makers from across the East Lancashire area. Our members enjoy making films of all kinds from documentary, travel, comedy, and animation to most recently producing films for local organisations such as Burnley Civic Trust, Burnley Empire Theatre Trust and Pendleside Hospice.

“We film events of importance in the local area for our annual newsreel and for retention at the North West Film Archive. We also put on film shows and take on film projects for other voluntary organisations in the area.

“We meet weekly on Wednesday evenings in Higham, in the Village Hall, between September and May.  Our varied programme brings in top-quality experienced speakers from the world of film and television, along with software producers and equipment providers. as well as specific training to develop film making skills for amateurs.

“It’s funding like this that has helped us to keep going since1931. It means we can afford to hire the village hall in Higham. I have no doubt that in nine years’ time, we’ll be able to celebrate our centenary.”

County Councillor Peter Buckley, cabinet member for community and cultural services, said: “Whilst a man of his time, Edward Stocks Massey was a visionary and the Bequest has offered vital support to voluntary groups, individuals and the local authority for facilities that benefit the community in cultural, educational and scientific fields for decades.

"These awards remind us of the vital contribution small and medium-sized community groups make within our community.  I would personally like to thank the Trustees, who have so ably watched over the investment of the original bequest enabling the Borough to continue to reap the benefits of the Stocks Massey generosity.

“The Edward Stocks Massey Bequest Fund is a fantastic example of how much groups can do with a relatively modest amount of funding. Whether it’s a choir, museum or school, our society benefits enormously from their volunteers’ dedication.”

For groups wishing to apply for funding in 2023, a public notice will be published in the Burnley Express in April of next year, inviting applications.

More information on the fund can be found by selecting this link Stocks Massey Bequest Fund - burnley.gov.uk.

To arrange interviews with recipients of the funding, reply to email media@lancashire.gov.uk.

The attached image shows a visit to Burnley Film Makers from Cat Lewis, well known film producer based in the North. It shows a good turn-out of members.

There are five categories of award:

For the first four categories, applications are first assessed by officers to ensure they meet the criteria and are then considered by a Joint Advisory Committee made up of three County Councillors, representing electoral divisions in Burnley, and two Burnley Borough Councillors in the presence of the Trustees. The Joint Advisory Committee's recommendations are then presented to the county council's Cabinet for final approval. 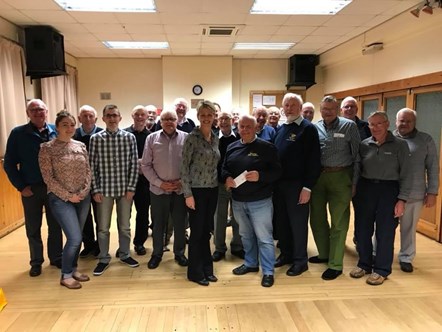