The leader of Lancashire County Council has welcomed comments from Levelling Up Secretary Michael Gove that he wants to see a devolution deal for the county.

During a keynote speech at this year's Convention of the North, Mr Gove said that he wanted to see more devolution powers being made available to counties in the north and he was looking forward to discussions with Lancashire leaders later this year.

The event, the region's major annual gathering of more than 1,000 business, political and civic leaders, had been organised to discuss the opportunities and challenges facing the North.

Councillor Phillippa Williamson, who is the chair of the Lancashire's Leaders group as well as leader of the county council, also appeared on the main stage at the event as part of a debate about Northern Promise: Assets and Opportunities.

During the debate she spoke of her determination to ensure the voices of Lancashire communities and individuals would be heard at every level of government.

She also outlined how the county's leaders were focussed on common priorities where they will make the most difference by working together within Lancashire and across the North.

She also explained how tackling issues through the Lancashire 2050 framework, which was published in November and is supported by the county's 15 borough, district, unitary and county councils, would ensure real progress could be made.

Speaking after the event,  Cllr Williamson, who was part of a delegation from the county led by the Lancashire Enterprise Partnership, said: "Events like the Convention of the North are important as they give us an opportunity to look at the common issues which we face in the North, but more importantly we can focus on the solutions to these problems.

"We have much to be proud of in Lancashire, but we are also very ambitious for our future as we know we have so much more to offer and events like this help to spread this message.

"Devolution is one of the ways we know we can attract extra investment into the areas which we think are the most important, which include employment and skills, better housing, transport and infrastructure, early years and education, and health and wellbeing.

"I very much look forward to picking up our discussions with Mr Gove and Levelling Up Minister Dehenna Davison later this year, and I am very pleased he is equally looking forward to talking to Lancashire's leaders." 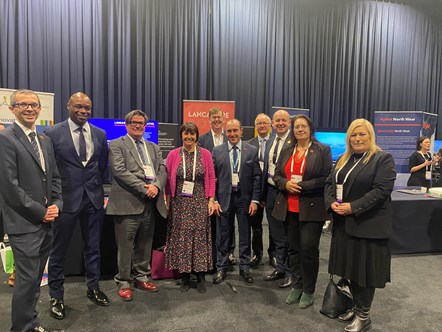 Members of the Lancashire delegation at the Convention of the North. Centre, Cllr Phillippa Williamson, leader of Lancashire County Council