A Lytham man who raked in hundreds of thousands of pounds selling counterfeit car badges has been ordered to repay his ill-gotten gains, following an investigation led by Lancashire County Council's trading standards officers.

The investigation was launched following a complaint from Jaguar Land Rover and resulted in the seizure of thousands of counterfeit car badges and stickers from a unit in the Snowden Road area of Lytham St Annes a few months later.

The property bore registered trade marks belonging to major car manufacturers including Audi, Volkswagen, BMW and Ford. Trading Standards estimate the haul to be worth more than £300,000 at current high street prices.

On 11 November 2021, Recorder Blakey, sitting at Preston Crown Court, imposed a sentence of 9 months' imprisonment, suspended for 18 months, with an unpaid work requirement of 50 hours.

Confiscation proceedings, under the Proceeds of Crime Act 2002, concluded on Thursday 4 August when Shlusar was ordered to repay illegal earnings from online sales of £554,913. He has been told to come up with the first payment of £62,886.89 within three months or face a year behind bars.

County Councillor Michael Green, cabinet member for health and wellbeing at Lancashire County Council, said: "Counterfeit goods with a calculated retail value in excess of £300,000 were seized thanks to a thorough investigation by Lancashire trading standards officers.

"While our priority is always to support our local businesses, we will not hesitate to prosecute those who flout the law.

"Protecting legitimate retailers by removing illegal operators from the marketplace is vital to creating a level playing field.

"This case sends out a strong message that we won’t tolerate anyone looking to get rich by duping the public with counterfeit goods.

"If you suspect fake goods are being sold, please report them to our trading standards service via our Citizen's Advice Consumer Helpline."

Anyone wanting to contact Lancashire Trading Standards for advice, or to report an illegal sale, should call the Citizens Advice Consumer Helpline on 0808 223 1133. 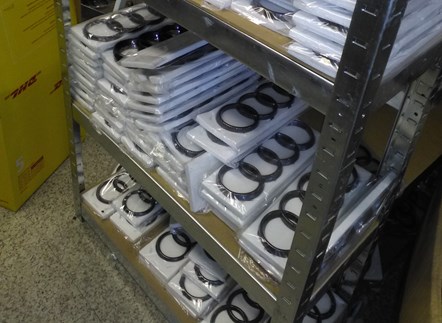