Good progress is being made with the major improvements underway to upgrade the look and feel of Ormskirk town centre, and improve travel in the area, but nesting birds have caused some delays.

The aim of the project is to support the local economy by making the area more attractive for everyone who lives, visits, shops and works in Ormskirk, as well as encouraging sustainable travel by improving public transport, walking and cycling facilities.

The first phase of the project started in May to replace the existing bus station with a more modern facility, and work is generally progressing well. However nesting birds on part of the site mean that the new bus station is now scheduled to open in early October, around six weeks later than planned. The temporary bus stops on St Helens Road will continue to operate until the new bus station opens.

Wood pigeons were found to be nesting in trees which formed part of an area of planting at the front of the bus station site adjoining Moor Street. Their presence delayed work to remove this feature and install drainage, a new boundary retaining wall, new kerbs, and make improvements to the road and pavement. Regular checks have been carried out and a survey in late July found that the birds had flown the nest allowing this work to progress.

The delay has had a knock-on impact on other project timescales, with the second phase of work to improve public areas on Moor Street and replace traffic signals at the St Helens Road junction now due to start in mid-September, and the final phase to improve cycling and pedestrian facilities on St Helens Road due to start in early December. The project was scheduled for completion around the end of 2022, but is now due to be finished in early February 2023.

County Councillor Charlie Edwards, Lancashire County Council cabinet member for highways and transport, said: "This project is vital to the future of Ormskirk to maintain its appeal to local people, visitors and future investors, and will make a real difference to the way the town centre looks and feels, as well as helping to reduce congestion in the town centre by making sustainable transport a more attractive option.

"The result will be worth it, making Ormskirk a better place to live and do business in the future, and I'm grateful for the patience people have already shown during the work to replace the bus station.

"I'm sorry for the delay of a few weeks to the completion of the bus station and the overall scheme due to the nesting birds. We have considered all the options to minimise the impact on the project timescales, including completing this part of the site once the bus station had opened, but on balance it was clear that this could cause other difficulties."

Councillor Adam Yates, West Lancashire Borough Council portfolio holder for finance and economic regeneration, said: "The public realm improvements to Ormskirk town centre will make a real difference for local businesses, visitors and residents.  It's unfortunate that the scheme has been delayed by the nesting birds, but it is absolutely essential that ecological requirements are met in full.

"The council and its partners will be doing everything they can to minimise any disruption caused by the delay. We'd like to remind residents and visitors that all town centre businesses will be open as usual during the improvements."

A letter has gone out to retailers on Moor Street and market stall holders to update them on progress with the project.

The Ormskirk Eastern Gateway Project has received funding from Lancashire County Council, West Lancashire Borough Council, Historic England's Heritage Action Zone fund, and the Lancashire Economic Recovery Growth Fund, which has been established by the county council to support projects to help local economies bounce back from the impacts of Covid-19.

Further project updates will also be posted on the project page on Lancashire County Council's website – search 'major transport schemes' to find the page or go to lancashire.gov.uk/council/strategies-policies-plans/roads-parking-and-travel/major-transport-schemes/ormskirk-eastern-gateway-project. 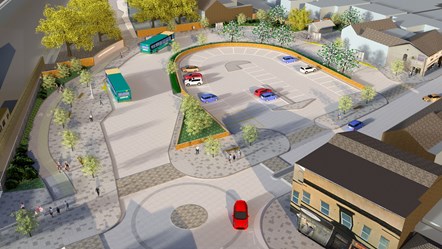