Plans submitted for a new railway station in north-west Preston

Plans have been submitted for a new railway station in Preston, which will improve access to travel, work and leisure opportunities in the region.

A planning application has been submitted to Lancashire County Council for the new Cottam Parkway station. The plans have been developed by the county council, working with Preston City Council and Network Rail.

Cottam Parkway is a proposed new railway station on the north-west side of the city, on the Blackpool to Preston railway line.

The new railway station, between Lea and Cottam, would improve travel connections to Preston, Blackpool and Manchester, and further afield.

It would give a connection to Preston station of just five minutes and to Blackpool in 20 minutes.

County Councillor Charlie Edwards, Cabinet member for highways and transport at the county council, said: "The planning application is a big step forward in delivering this new railway station, which will open up new opportunities for people and be a gateway to other parts of the region.

"We've made some important changes to the design since we announced the plans. We've added native scrubs, trees and native species-rich grassland on a field near the station to provide an overall boost to biodiversity from this scheme and help wildlife, which will also give a 10% biodiversity net gain for the project.

"We're already in talks with the Department for Transport and rail operators to get as many services as possible serving the station."

If the plans are given the go-ahead, construction would begin next year.

The new railway station would be situated between Lea Road and Sidgreaves Lane / Darkinson Lane, near to the site of the former station, and provide a car park with bus, cycling and walking links to the local area. Other planned sustainability measures include electric vehicle charger points, a 'green' planted roof and solar panels on the railway station.

The proposed mitigation includes planting to the south of the railway line between the Ashton and Lea golf course and the bridge at Darkinson Lane and of the railway cottages. These areas would boost biodiversity on this site.

Directly connected to the new Preston Western Distributor Road, the railway station would provide an attractive and convenient option for people travelling from the west side of the city, including those who currently park at Preston Railway Station to catch their train.

"We are pleased to hear that the plans for the Cottam Parkway - much needed infrastructure for the North West Preston development – are progressing well. We believe the plans to improve the transport offer in Preston, with a focus on low carbon journeys and green travel, are essential in helping our transport networks meet the current and future needs of our growing and developing communities, businesses and visitor numbers.

"The plans provide the sustainable transport networks needed to support economic growth in Preston and outline essential and transformational ways to relieve congestion and pressure on roads, as well as promote alternative means of travel. Together with our partners, we continue to explore every opportunity available to enhance and develop Preston, including transport and connections in and around the city."

Funding for the station has comes from the Department for Transport's Transforming Cities Fund and the Preston, South Ribble and Lancashire City Deal.

The City Deal is an agreement between Lancashire Enterprise Partnership and Preston City Council, South Ribble Borough Council and Lancashire County Council, along with central government and Homes England.

The Transforming Cities funding will allow the county council to work with partners to fundamentally change the way people travel into and around Preston city centre, and improve the local environment.

The TCF funding from the Department for Transport marks the first stage of a vision to transform the wider Preston City Region to continue to be one of the most productive city regions in the UK, and also become one of the most environmentally sustainable, people-friendly and attractive places in the UK to live, work and enjoy.

Find out more information about the station proposals at: www.lancashire.gov.uk/CottamStation

You can view the planning application on the county council's planning page at https://planningregister.lancashire.gov.uk/Planning/Display/LCC/2022/0049 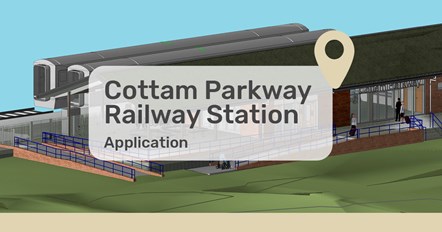