Hidden cigarettes and tobacco worth £18,000 are seized

Trading Standards officers from Lancashire County Council seized a large haul of illicit cigarettes and tobacco from a shop in Preston on Tuesday 17 January.

More than 1,400 packs of the illegal products, which would be worth over £18,000 if sold as genuine, were found in three concealed compartments. These had been excavated into walls, including behind false drawer fronts and behind swing-out wall-fixings, one of which was operated with a magnetic key fob. The trader was selling three packs of illicit cigarettes to a customer when the officers entered the shop.

Around £10,000 in cash, hidden in a concealed compartment and suspected to be the proceeds of crime, was also seized.

Trading Standards inspected the premises with the assistance of Lancashire Police, and the seizures followed recent intelligence received from the public, together with complaints about sales received from other enforcement agencies.

County Councillor Michael Green, cabinet member for health and wellbeing at Lancashire County Council, said: "These traders had gone to considerable lengths to hide their haul of illicit and counterfeit tobacco. The sophisticated hiding places we are currently finding demonstrate the value of this illegal trade.

"Our officers often find packs stashed away in electronically operated secret compartments under counters and in walls, or hidden in vehicles and store rooms. Cheap illicit tobacco is readily available to young people and encourages them to smoke and become addicted.

"The sale and manufacture of illegal tobacco has a negative impact on legitimate local businesses, who find their sales plummet when tobacco shops set up nearby, and on our communities and the health and wellbeing of our young people. We are determined to tackle this type of crime."

If you would like to report any businesses you suspect of supplying illicit tobacco, contact Lancashire Trading Standards team via the Citizen's Advice helpline on 0808 223 1133. 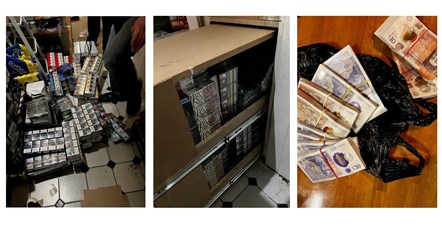 Some of the cash and cigarettes seized and a hidden compartment